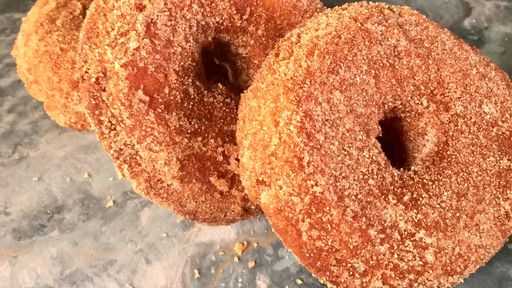 Apple Cider Donuts for the win!

directions
Line a baking sheet with parchment paper and dust with 2 tablespoons of flour. Set aside.
In a medium saucepan over medium-high heat, add the spiced apple cider. Allow to reduce until 1/2 cup remains. and about a 1/2 cup remains, about 20-25 minutes. Remove to a medium bowl, and whisk in apple sauce, milk, and vanilla extract. Set aside.
In a large bowl, whisk together the flour, baking powder, baking soda, salt, 1 teaspoon of cinnamon, allspice, and nutmeg. Set aside until ready to use.
In the bowl of a standing mixer fitted with a paddle attachment, beat together the butter and brown sugar on medium speed until light and fluffy, about 3 minutes. Add eggs, beating together until thoroughly combined. With the mixer on low, in batches, add the flour mixture and cider mixture. Start with 1/2 of the flour mixture and beat until combined, then add 1/2 of the cider mixture, beating until combined. Repeat this process for the remaining flour and cider mixture.
Remove dough to prepared baking sheet and pat out to a 1-inch thickness. Dust the top with remaining 2 tablespoons of flour and wrap tightly in plastic wrap. Allow dough to chill in the refrigerator for at least 3 hours.
Fill a large Dutch oven with 3-4 inches of canola oil and preheat to 360ºF. Line a baking sheet with a baking rack and set aside.
In a large bowl, whisk together granulated sugar and remaining tablespoon of cinnamon and set aside.
Using a 3-inch biscuit cutter, punch out as many rounds as possible. Using a 1/4-inch biscuit cutter, punch out the centers of the donuts.
Working in batches, carefully place the donuts in the preheated oil and fry on both sides until deep golden brown, about 1-2 minutes per side. Using a slotted spoon, remove donuts to prepared baking sheet and allow to cool slightly. When cool enough to handle, but still a little hot, add a few donuts at a time to the bowl of cinnamon-sugar mixture and toss to coat. Alternatively, add the cinnamon-sugar mixture to a paper bag, drop 2-3 donuts at a time and shake until coated. Remove to a platter and serve!
Tip: Roll the punched out dough into balls and fry to make donut holes!