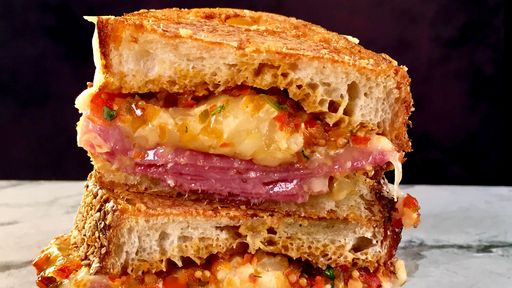 This is all types of good!

directions
For the Pepper Jam: In a bowl of a food processor fitted with a blade attachment, add bell peppers, jalapenos, red onion and garlic. Pulse until minced and thoroughly combined. Remove pepper mixture to a large saute pan over medium heat and stir in the orange zest and juice, sherry vinegar, mustard seeds and salt. Bring to a simmer and cook until the liquid has evaporated and mixture has thickened, about 45 minutes. Remove from heat and allow jam to cool completely. Fold in parsley.
For the Grilled Cheese: Place a griddle pan or cast-iron skillet over medium heat. Spread one side of each piece of bread with the softened butter then flip over so they are butter side down. To 2 of the pieces of bread, spread the pepper relish evenly over the surface. Lay out 4 pieces of salami followed by a 1/2-cup of shredded Fontina cheese. Repeat this process with the remaining 3 sandwiches.
Top each sandwich with the remaining pieces of buttered bread, butter side facing up. Sprinkle half of the Parmesan cheese on to the top butter layer of the sandwiches, then carefully flip the sandwiches over on to the griddle pan, butter and parmesan side down. Sprinkle the remaining amount of Parmesan on the top of the un-toasted layer of bread and press it in to the bread. When golden brown and crisp, about 2 minutes, flip over and brown on the other side.
Remove the four sandwiches to a cutting board, slice diagonally then serve.
Tip: Make a large batch of the pepper jam and store in an airtight container for 1-2 months!