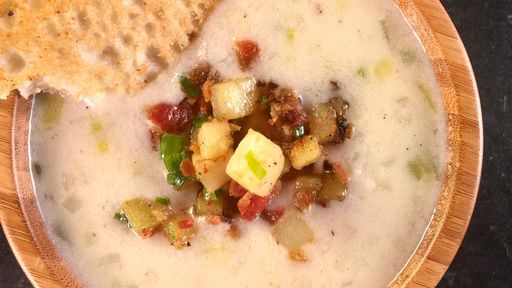 A spectacular side from Carla Hall!

directions
For the New England Chowder: In a large heavy bottomed pot, over high heat, add clams and water. Bring to a boil and cook clams just until they open, about 8-10 minutes. Discard any clams that have not opened. Using a slotted spoon, remove the clams from the water, and allow to cool slightly. Once cool enough to handle, remove clam meat from shells to a medium bowl and set aside.
Strain the clam cooking liquid and transfer to a medium saucepan, keeping over very low heat until ready to use.
In a large Dutch oven over medium heat, add the bacon an cook, stirring occasionally, until browned and crisp, about 4-5 minutes. Using a slotted spoon, remove bacon to paper towel-lined plate. Pour off all but 2 tablespoons of bacon fat into a small bowl, and return Dutch oven to stove top. Add the celery, onion, and leek to the pan, cooking until soft and translucent, about 3-4 minutes. Season with salt and pepper. Add the flour, stirring to coat vegetables. Stir in the thyme, reserved clam cooking liquid, milk, bay leaves and nutmeg. Bring to a boil and reduce to a simmer and cook until thickened, about 20-25 minutes. Season with salt and pepper. Remove and discard thyme sprigs and bay leaves. Stir in the heavy cream and lemon zest.
Meanwhile, in a medium saute pan over medium-high heat, add 1 tablespoon of reserved bacon fat. Add potato and celery root, and cook, stirring occasionally, until tender, about 10 minutes. Season with salt and pepper. Remove from heat and transfer to a medium bowl. Add cooked bacon and scallions and toss to combine.
To Serve: Stir clam meat into chowder, divide chowder evenly amongst bowls, and top each bowl with a heaping tablespoon of potato mixture. Serve with a Johnny Cakes on the side.
For the Johnny Cakes: In a medium saucepan, bring water to a boil.
Remove the boiling water from heat and gradually add the cornmeal mixture, whisking to combine. Stir in the milk and season with salt and pepper.
In a cast-iron skillet over medium-high heat, melt the butter. Ladle 1/4 cup of cornmeal batter into the pan, and cook until the top begins to bubble and the bottom is golden brown, about 2-3 minutes. Flip and cook until opposite side is golden brown, another 1-2 minutes. Remove to a plate and repeat with remaining batter.
Tip: If you’re fishmonger doesn’t have fresh clams, this chowder is excellent with oysters, seared scallops or even some sauteed shrimp!