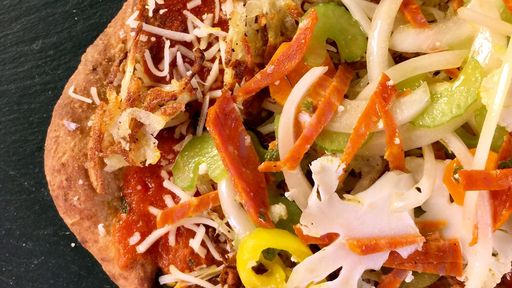 A fun twist on pizza!

directions
For the Naan Bread: Preheat the oven according to naan package directions.
Evenly brush the naan bread with olive oil, spread with equal amounts of mashed garlic. Evenly sprinkle the flaky salt, red chili flakes and oregano between the naan breads. Place on a baking sheet and bake until golden brown, about 8 minutes. Remove from the oven and set aside.
For the Hash Browns: Raise the oven temperature to 425ºF. Place a baking sheet in the oven until hot, about 5-7 minutes. In the meantime, in a medium bowl add the potato and toss with olive oil, salt and pepper. Spread the potato in an even layer on the hot baking sheet and bake until golden brown and crispy, about 10-12 minutes. Remove and set aside.
For the Italian Dressing: In a medium bowl add the garlic, red wine vinegar, oregano, mustard, thyme and whisk to combine. While whisking, slowly drizzle in the olive oil and whisk until combined. Season with salt and pepper.
For the Vegetable Salad: In a large bowl add the cauliflower, banana peppers, carrot, celery, onion, pickled jalapeno and pepperoni. Toss to combine. Drizzle the dressing around the outside of the bowl and toss salad lightly to coat.
To Assemble: Spread warm marinara sauce on top of the naan. Evenly top each naan with 1/4 cup mozzarella cheese, vegetable salad and hash browns and serve!
Tip: Get creative! Use your favorite combination of vegetables medley in the vegetable salad!