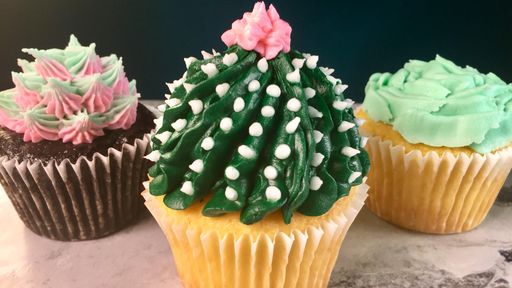 Almost too cute to eat!

directions
For the Cupcake Base: Preheat the oven according to cake box instructions.
Line two standard-sized muffin tins with standard white cupcake liners and set aside. Line two mini muffin tins with mini white cupcake liners and set aside.
Make the cake mix according to package directions and bake. Remove from oven and allow to cool completely. Repeat until all cupcakes are baked and set aside to cool.
For the Buttercream Frosting: In the bowl of a stand mixer, fitted with a paddle attachment, add 9 cups of powdered sugar and 3 cups of butter and beat together until smooth, about 2 minutes. Add the vanilla, and increase speed to high until frosting is light and fluffy, about 2-3 minutes. Continuing to beat on medium, add 1 tablespoon of milk at a time until desired consistency is reached, using about 1/4 cup of milk total. Remove icing to a large bowl and set aside. Repeat with remaining ingredients making a second batch of icing.
Measure out 4 cups of icing and place 2 cups of icing in a medium bowl, and the remaining 2 cups of icing in a piping bag fitted with the #3 tip and set aside.
To the bowl with 2 cups of icing, add a few dashes of the pink food coloring and stir to incorporate completely. Continue to add more color until a desired hot pink color is reached. Remove 1 and 1/2 cups of icing to a piping bag fitted with a #225 tip and set aside.
Remove 2/3 of the remaining icing and place in a large mixing bowl. Add 1-2 drops of the kelly green coloring and stir until fully incorporated. Continue to add more food coloring until a light green, mint color is achieved. Remove half of the mint colored icing to a piping bag fitted with a #104 tip and set aside, reserving the remaining half.
To the remaining bowl of icing, add at least 5-6 drops of kelly green food coloring and stir until fully incorporated. Continue to add food coloring, a few drops at a time, until a dark green color is reached and remove icing to a piping bag fitted with a #352 tip.
For the Barrel Succulent Cupcake: Using the piping bag with dark green icing, pipe a tall mound of icing in the center of the cupcake. Hold the tip flat against the mound of icing and starting at the bottom, apply pressure as you move it to the top, releasing at the top. Repeat this action, moving around the mound of icing until the mound is covered, creating a ribbed look.
On the edge of each rib, starting about halfway up the rib, pipe small dots to the top using the white icing. Repeat until all ribs are dotted with the cactus’ “needles”.
Using the pink icing in the piping bag fitted with a #225 tip, pipe a small rosette on the top and in the center of each cactus. Repeat with remaining cacti.
For the Spiky Striped Succulent Cactus Cupcake: Fit a piping bag with a #32 tip. Spread a strip of the remaining 1/2 cup of pink icing inside the piping bag, ensuring to get all the way down to the tip. Fill the piping bag with the remaining half of mint green icing. Test the piping bag by piping out some icing until you see both pink and green coming out.
Pipe a small mound of icing in the center of a cupcake. Starting at the bottom of the icing mound, pipe small stars around the base and work your way up until the entire mound is covered, creating a streaked spiky cactus.
For the Desert Rose Succulent Cupcake: Using the piping bag with mint colored icing fitted with the #104 tip, make a small mound in the center of a cupcake. Starting at the base, with the tip against the base horizontally, pipe a petal to the top of the mound. Rotate the cupcake slightly and pipe another petal right next to the previous petal. Repeat all the way around the cupcake, which should now look like the inner petals of a rose. Begin at the base of the icing once again, and pipe another round of petals, moving upward slightly over the frosting. Continue this process until the petals reach the edge of the cupcake.
Using these three succulent shapes, decorate all standard and mini cupcakes with your desired shapes!
Tip: Get creative! Adjust the colors of the icing to fit the theme of your party!